Today was a very exhausting, but really cool. I'll tell you what made it a good day:

Adam is two years younger than me and lives in a town 35 km away called Trinec. Every day he gets on a bus...which takes him to a train...which he rides until he reaches the good town of Frydlant, where he walks to our beloved Beskydy Mountain Academy. Then, after school has ended, he does the same thing (except in reverse order)! Today Patrick and I got a taste of what it is to live so far away and have to spend almost two hours travelling there and back. I don't know if I would survive! More than half the students have to take a train or bus to get to school. It's too bad for them...but it should show you how unique BMA is that students would sacrifice time, money and energy to attend it! 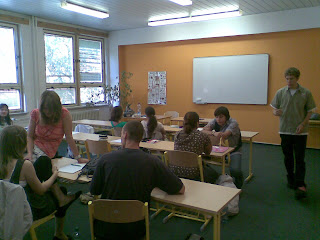 So anyway, today i took the train and bus to Trinec with Patrick and Adam. Our destination was the Trinec skatepark, which is in the middle of nowhere, but definitely the coolest skatepark I've ever skated at. 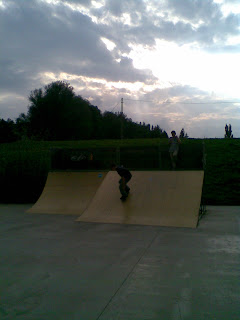 I've been skating for about 3 years, and I don't nearly skate enough, but I'm pretty proud of what I can actually do! It's a great way to get outside and get some exercise, but I'm not such a fan of the sweating-like-a-pig part. Hmm. 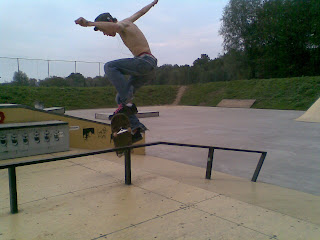 It's sad that fall is coming, which means less skating because of rain. But hopefully I'll get some good days in, as soon as I rest my poor legs and feet from today! And you know what winter brings........snowboarding!! I hear there's supposed to be a ton of snow this year...
Posted by Tyler at 10:42 PM

Tyler, I just read through your blog and loved it! I wasn't able to listen to the songs you recorded, so am hoping I get to hear those someday. You're a great man, Tyler, and I'm glad I know you!
Ken