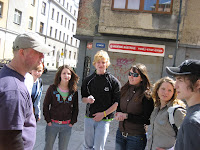 This weekend was pretty packed! on Saturday me and Caleb went on a little trip with Tensing (the youth choir here in Frydlant) to Ostrava to a Christian-run club called Templ where they were having a big Tensing festival! It was really fun. I've been Tensing Frydlant's guest guitarist for about two months (Caleb doesn't want me officially going to Tensing, and i don't have time this year anyway! =)) and so i've been practicing songs with Caleb on the bass and Boza, our youth leader on guitar as well (but i'm a lot better than he is...hehe). The big thing that we've been practicing lately has been Meant To Live by Switchfoot (and it's sounds AWESOME!!!) but unfortunately we didn't get to play it at the festival because everyone else hadn't really mastered the song yet vocally. So bummer. We played two songs and then they also did three fun dances which were cool. 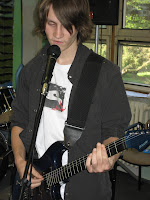 After we got back around 5, some of us headed over to the church building and just hung out. That was lots of fun because me and Caleb were playing all the songs that we both knew (all 3!) and sang some worship songs and it was a great time. Then we goofed off some playing with tape...(don't ask =))

On Sunday i was in charge of worship, and so that's mostly what i worked on in the morning and in the afternoon. That was fun, even though as always it was a little nerve-wracking! 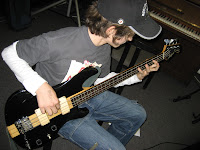 One thing i have to do by today is finish an essay on the topic of "Who Is Man?", so that's been fun trying to put something together. We all had a big discussion about it last night as a family and it was great and gave me a lot of ideas, so hopefully my paper will be okay! I'm writing it in English, so i can put it up on my blog once i'm done for those of you who are at least mildly interested!

Josiah Venture Spring Family Conference is also coming up soon, which i'm really looking forward to! It'll be great and i'm sure i'll have lots of pictures!

Well that's all for now, gotta get back to writing my essay...And just a piece of advice - If you ever have to write an essay where you have to think a lot, it's great to listen to old Switchfoot while you write! It helps me a lot! =)
Posted by Tyler at 2:12 PM

Tyler, Be sure to post your paper when you finish writing. I'd love to read it!
Andrea Pitcher

yep old switchfoot can do that to you