well, this week was pretty fun...well, school wasn't very fun, but come Thursday evening it got really fun and interesting. You see, on Thursday evening I got together with some friends again and we played Risk...it was a ton of fun. Even though I did lose...at least i've learned some lessons for next time!

Then Friday was some holiday so we didn't have school! Of course I slept till 10 (any later and I would feel bad that i have slept too long) and for most of the day just chilled. I don't really remember much from that day...except I spent a lot of time on the computer. Not completely sure what I did though...hmm...oh well! =) 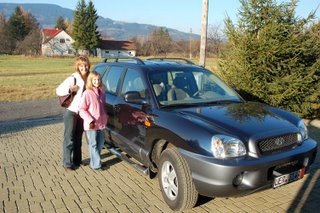 Then on Saturday we took a trip to Ostrava...in our new car!!! =) My mom's dad bought my mom a four wheel drive SUV for the winter and tons of snow; it's awesome!!! On the left there's a picture of it! Dad picked it up in Germany on his way back from the States and drove it a loooong way! Go dad!! Anyway, we went to Hornbach because dad needed to check on something and mom wanted some new plants. Then we drove over to McDonalds and then went to some clothes shops looking for a tie for me...i'll explain all in due time, so don't worry! =)) We also found some nice black pants... And headed home. Okay, now i will explain. Ahem. 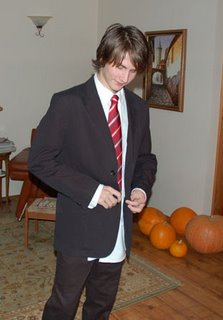 Anyway, Patrick (if you've forgotten already, he's the american who I go to school with, also the guy who forgot his passport on our "trip" to Budapest) has been taking ballroom dancing classes since the beginning of the school year. And no, he didn't chose to go, a girl in my class made him because her boyfriend couldn't go with her. So he went, and found out it wasn't as bad as he though, it just takes up a lot of time (two or three classes a week). So on Saturday at 6 was Patrick's group's final performance, and so i got to go to it! So i got all dressed up and met up with some other guys from school and we headed into the big building where it was all taking place at.

I went there thinking this was all a joke, and i thought it was all extremely funny that someone would want to learn something like that. Hehe. My view sure changed by the end of the evening.

Well, to keep it short, I was really blown away. It was really cool! Patrick and my other classmates all did a really good job. They had even invited two pairs of professional dancers who were really sweet. Overall it was probably one of the best experiences i've had in a while. It was fun being so "proper" and not looking weird because everyone else had to be like that as well! =) Anyway, the night has inspired me... Patrick told me that during the end he really started to enjoy it and he might go again next year. So, if all works out (if he goes, if I have time, and if I find someone) I think I would do it. I objected to it this year because I guess i didn't realize that it's a cool thing to know! So we'll see what happens........ 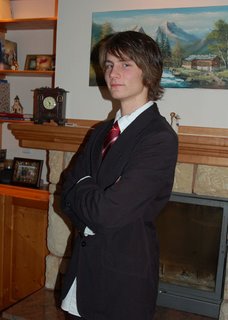 Then today (Sunday) I led worship again after a month! It's crazy how fast it's gone by... This Sunday we weren't up at Malenovice, we were back down in Frydlant. But it went really well, even through some complications. After and during I felt that I'm getting better and better. We'll see where God takes me on this!

Well, I have some homework to do for Geography and Caleb wants to get on, so it was great telling all of you about my experiences! Don't forget to comment so i know you're all still alive! Have a great day!
Posted by Tyler at 8:43 PM

~Tyler~
You are SO good at updating your blog!! Can you do mine? Hehe...I'm badly in need of an update!

By the way...you looked great in your tie...and you did a great job in worship tonight!

Hey Ty with the Tie on.....are you handsome or what? I love the sideways James Bond look!!!

Hearing you talk about how ballroom dance is cool now makes me think of a hit show here in the States called "Dancing With the Stars." They hook up a professional dancer with some "star," be it an NFL football dude or an actor or a talk show host, etc. Well, the finale was this past week and the winnder was a guy named Emmmit Smith.....an NFL football player. Go figure! The runner up was a guy who used to be on a TV show called "Saved By The Bell." I don't know if you ever saw that show, but the guy is now a great dancer. In fact, I heard this week that "Dancing With the Stars" has almost as high of ratings as "American Idol!" All this to say, you're totally cool right now in wanting to give dancing a good name. It's a big deal here now!!!

It's fun hearing how life is there. Your mom looks so great in her cool new jeans and cream coat, don't you think? She has to have a great look to go with her great new car!