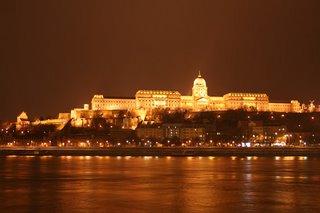 well! I had quite the weekend! This time Patrick, Jonny and I DID get to Budapest! =) It took about 10 hours of training there and then 10 back, and the whole trip went great.

We stayed in a hostel in the center of Budapest, right by the Christmas Market, Burger King and McDonalds! What more could you want!? =)

so yeah, we got into the Keleti train station at about 11:30 and walked over to our hostel to check in. I went to bed, but Patrick and Jonny scouted out Budapest for about 2 hours. The next morning we got up at 9 and had McDonald's breakfasts. =) Then we walked around town till 12, when we got a little hungry...so then we searched in vain for affordable food for about two hours and eventually found it in Burger King. During the time where we were walking around we saw the churches (they are being restored and cleaned, it's really cool), saw the Danube, walked over the bridge across the Danube, walked up to the citadel (where we got hungry) and walked along the castle walls up on the mountainside. Then we walked back down the mountain and found a Burger King. So overall it was a lot of walking... It was a pain at first but eventually i was concentrating too much on all the beautiful architecture that i forgot about the pain in my legs!

We then returned to our hostel, got our swimsuits, and headed to the bathhouse! We spent two hours there laying around and half-sleeping...it was really relaxing. We left at 5 and went back to our hostel again, and decided to take a nap! =) So we slept for an hour and then walked around a bit. We got some more food, walked over to the Danube, where Jonny took pictures of the bridge, and hung out and talked. Then at 8:30 we slowly made our way over to a Live Jazz Club i had found (on a map)...That was my favorite part of the whole trip! They had a pianist, a drummer, a standup bassist and a woman singer. It was the most fun two hours of sitting i've had in a long time! I wish we had a jazz club around here somewhere! Unfortunately it's not really the Czech kind of thing... I proposed to dad that we should make a jazz club though! Then i could go every day! =)

After Jazz we walked around town a bit, then once the lights on the castle were out, we walked up there and walked along the walls looking out at the lighted city. That was an awesome time too. We talked about politics and musicals for about an hour, then got cold and walked around some more. On the way down from the castle we told jokes, and i almost didn't make it back because i was laughing so hard! =)

At around 1:30 we decided we were tired and went back to the hostel and went to bed. The next morning we woke up at 8 and went to another bathhouse (not as fun as the other one, but really big). Our train left at 2:30 so after three hours we walked back over to the Christmas Market and bought some shishkebabs (don't know if that's how you spell it...oh well) and some Christmas presents. Patrick's headphones had broken the previous day so we spent our remaining time looking for some he could buy, and right before we got to the train station he found some! And i found something extra cool... A Coldplay - Rush of Blood to the Head poster! (for those of you who don't know, it's one of my three most favorite bands) I was so happy!!! They had a really cool Jamiroquai one too but i ran out of money.......... Oh well, something to look for when i go back! =)

We then spent another 10 hours on the train back, most of the time we slept and talked about all kinds of stuff. Overall it was an awesome trip and something i'll remember for a while! Have any of you guys ever been to Budapest? It was especially cool 'cause this is the very dead of the tourist season so it seemed like at times we had whole streets to ourselves! It was crazy how few cars were on the roads!

And then i had to return back to normal life...which wasn't so bad. Today was a good day, but nothing much happened. I'll be back with more info on my very interesting life hopefully on Sunday! =) Don't forget to comment! (by the way I look strange in that picture 'cause we were just in the bathhouse and so my hair was everywhere and i combed it kinda weird =P)
Posted by Tyler at 7:57 PM

I love your blog entries...it makes me feel like I'm going along with you on your adventures! My favorite line in your blog is this: "It was the most fun two hours of sitting i'm had in a long time!" You are so cute and funny!

I love that you got a ColdPlay poster too. What a great find!

I'm glad you've now figured out Budapest...and even the baths! You can lead the way for our family to go visit there sometime!

Your hair did look a little bit different, but I wouldn't have noticed if you hadn't said anything!

Dude! you made it this time finally!
I love Budapest. Really cool buildings and stuff.
Yeah, speaking of Jazz Cafes. We have like two in Zilina. Sweet stuff. So when I get back from USA we should go sometime. Or when you go to Zilina to give Dawson that stuff ask him about Boston Cafe.
Nice pictures. I love your hair! It's beautiful!
Hudson

i've been to budapest it is aweome...i love the christmas markets especially in Vienna...awesome
coldplay rocks my socks off!!!
well sounds like you had an awesome time!
suska

Nice Blog Entry!
I could never write so much unless I REALLY wanted to. I myself still haven't heard from your trip so it was fun to read about it!
Good work! I love reading about your times!
Claire

Nice Blog Entry!
I could never write so much unless I REALLY wanted to. I myself still haven't heard from your trip so it was fun to read about it!
Good work! I love reading about your times!
Claire

ahhhhhh....Budapest...many good (and bad) memories there...
Tyler, my greatest appologies for not writing you in so logn. I think what I'll do is just hand write you a nice long letter and send it to you! That way I'll get it done!
miss you! don't have to much fun over there without us! (well...I guess you can....if you insist)

Tyler, maybe you should think about writing a travel guide. I'd buy it.
See you!
Anna