Well, i'm back! I realize that it's been a while since i've posted on my whereabouts...so i have a lot of catching up to do!

First, i will tell you about Christmas! We had a wonderful Christmas as a family. On Christmas Eve we had a Christmas Eve party with the Tills and the Pitchers – lots of eating food and then a gift exchange. It was lots of fun! So then the next morning mom had to actually wake us up (for the first time!) and we headed downstairs and started the day!

I got lots of shirts, which i'm VERY happy about. The most special gift to me though was what i got from my dad... This year he decided do go a little overboard (in a good way!) and got me a Marshall guitar amp! It's been lots of fun playing on and i think i'll have it for a long time!

From my mom's parents i got some of those little Lord of the Rings figurines that you put together and then paint and you can also play a big strategy game with them – do you remember back in October the Pitcher boys' party? Well anyway, it's been really fun to paint them and i think i'm getting the hang of it...i'll put up some pictures soon!

The days after Christmas were great...full of sleeping in and playing guitar etc. Then before i knew it New Year's Eve was here! There was a big party up at Malenovice, so i went up there for a while. We had a morning Church service instead of our usual afternoon service, so i had to wake up extra early to go up and practice for worship. Then we played some games outside. Around five i was getting kinda tired and wasn't really in the mood for tons of people... So me and mom went back home. We watched a soccer movie i had gotten for Christmas and mom made tacos! So we had a little fiesta going on! Then we watched fireworks from the balcony...and it was a pretty good time!

Two days after that on Tuesday though...I got sick with strep throat. I think i got it from being outside in the cold for the games that i mentioned. So dad drove me to the hospital in Frydek-Mistek because everywhere else was still closed for the holidays. Then we had to drive all the way to Ostrava to go to the pharmacy for antibiotics. So that was an interesting experience! 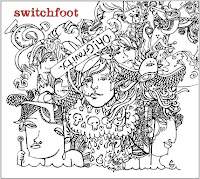 So till Thursday i was just laying around... Luckily I had ordered Switchfoot's new album – Oh! Gravity, and my grandma had it sent to me along with all kinds of other Switchfoot stuff, and it got there on Tuesday! So i've been loving their new album and it's given me something new to listen to! So on Thursday i was starting to feel better, but somehow i caught a cold and cough from Caleb who had also been home those days. School started on Wednesday, so we missed three days. We're both feeling better now, and hopefully the antibiotics will help keep the strep in for a while!

But one good thing came out of being sick – my dad couldn't make me come out and chop wood! =) But it will come soon...I have to build up those muscles somehow!

Well, we really missed you at Malenovice the 31-1.
Sounds like you've had a fun break from school...I can't wait to hear you play on the amp!!!
Hannah

Hi, I don't know if you remember me, its been about 10 years which is a little scary. My mom showed me your moms blog and i saw the link to yours and thought id have a look. I'm sure your parents still get our prayer letter but i wouldn't know if you read it!
Well i just thought id leave you a comment, its really weird and interesting seeing as i only knew you when we were about 6. It's also interesting reading about another missionary kid somewhere.
Anyway i think i've written enough, its not usually like me to do this kind of thing but ah well.
Jess

Switchfoot huh...seems like I've heard of them. Have you ever seen them live?

Hey! When are you going to update your blog??!!!