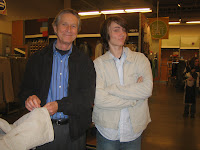 Wednesday morning at about 11 o'clock i walked out into the lobby of the Portland airport to meet my grandparents...and my adventures started! Hello to all you people out there, i have much to tell you about!

Our first stop was Krispy Kreme Doughnuts in Portland...and in the words of my Bapa: "It's all going downhill from here!" =) 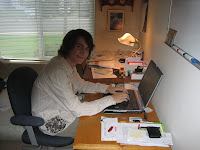 It's been so much fun spending time in Junction City, Oregon with my grandparents and my uncle Mike. The whole thing started with my uncle making a joke about how i should come over because Switchfoot is playing in Eugene, the town about 15 minutes away from where my grandparents live! And sure enough, I did come! And i'm sure glad i did!!

I got over jet-lag fairly quickly; they made me stay up till about 3 o'clock my time so that i would be fine the next day, and even though i started to fall asleep in Barnes and Nobles the next evening, a quick coffee fixed that and i've been fine ever since!

Last night was the big night... Switchfoot played at the McDonald theater, where my mom saw movies when she was little, which has now been renovated and fixed into a concert hall. It was just the right size and it felt great! Me and my uncle Mike went down about 15 meters away from the stage and my grandparents went up onto the balcony, of course not forgetting their earplugs! And i'm not joking, they were sure glad they had them! 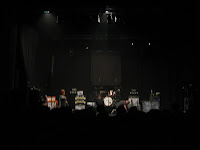 Copeland, the band that's touring with Jon, Tim, Chad, Jerome and Drew aka Switchfoot came out first, and played a 45 minute show. They weren't that bad! But they ain't got nothin' on the Feet. It took all the roadies about a half hour to move all of Copeland's equipment out and get all of Switchfoot's stuff inside and onto the stage. And that was probably the longest half hour i've ever had to endure! 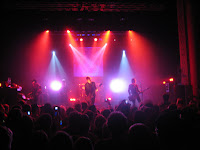 And then...they came out. Opening with Stars, which woke us all up, nontheless. I was blown away! I couldn't believe it: Switchfoot, my favorite band of all time is playing right here, and i'm right here too! I'm not watching their performance on a computer screen, but i can see them with my own eyes!!! I was speechless and couldn't stop smiling! =) 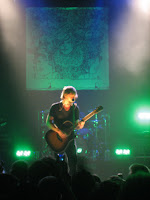 They played about 10+ songs. I wasn't really counting - i just wanted to take in each performance seperately as it was. My favorite songs that they did had to be This Is Your Life and Awakening. Those were definitely the most memorable. Another favorite was On Fire and the encore: Let Your Love Be Strong and possibly their most famous Dare You To Move! DYTM was great because Jon did Love acoustically without any backing instruments, and he moved right on to DYTM still on his acoustic. So the first verse and chorus were acoustic, then the rest of the band joined in and he switched guitars (his good ol' Gibson did the trick) and really rocked out! Simply amazing.

I love it when he talks to the crowd, then you really feel like you know Jon and them all. Jon really carries the whole performance on his shoulders though, and you could see the sweat pouring down his forehead by the end of it. It must be crazy doing show after show after show... I don't think i really ever realized how much energy and time they all have to put into each and every one. I really admire all of them and am thankful for all of them as well! 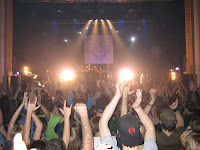 I was so tired after the whole thing...but it was amazing. By the end my ears were ringing and when we walked out to the car my ears were still half shut down so it was strange =) But i soon recovered and got a good night's sleep!

Grandma and Bapa had a fun time too =) They made it with their earplugs, and said that that was the best concert they'd ever been to (but it was also their first!). But i don't think they'll be going again any time soon! =) Or...could i be mistaken??? 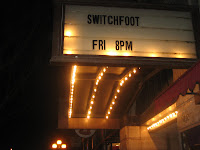 One thing that my uncle Mike surprised me with when i got here was that tomorrow, on Sunday, he's driving me up to Seattle...to see them again!!!!!!!!!! I can't wait!!!!! It's about the same distance from Frydlant to Prague, so about 4 and a half hours. I'm really excited though, because this time i can enjoy it even more than the last time because i'll know what better to expect! I'll definitely get some footage on the video camera, so hopefully i'll put it up here once i get home and stuff! And you guys can be praying for me... It would be really great if i could meet them after or something, so i'll probably be hanging out by their bus after the show!!

Today Bapa and uncle Mike took me to a HUGE guitar shop in Eugene, and i found Jon's Gibson! It was pretty cool. I want one! (mom-hint, hint...)

Well, we're gonna have to leave around 10 in the morning tomorrow so we can get there, get food, and get in line so we get all the way up to the front! It'll be awesome. Mom told me that i should make a sing saying: I FLEW ALL THE WAY FROM THE CZECH REPUBLIC TO SEE SWITCHFOOT!!! I couldn't find any paper...yet. But i should totally do it and see if they notice!

I'm here till Thursday, so it's not over yet! I'll still have lots and lots of fun with my wonderful grandparents, and my quirky uncle! =)
Posted by Tyler at 5:43 AM

What an awesome blog post! WOW! So many great memories already...and still another Switchfoot concert to go!

I'd love to see you make that sign! Better track that down before you head up to Seattle...Uncle Mike is the paper man (remember that was his job years ago!) so he'll know where to get it!

The lightbulb went on when I read about John's Gibson...aha! That's why you want one! Discuss that with dad when you get home :)

Soak in every bit of God's goodness on your trip! This is such an amazing gift from Him through Grandma, Bapa and Uncle Mike!

I love the pictures and the story about being at the Switchfoot concert. What a dream come true. But then to think you get to see them again tomorrow is absolutely CRAZY!!! I have been praying that you would get to meet them, so I'm with your mom and say MAKE THE SIGN!!!!

Now the fun part for me is that I get to see you on Monday night on your way back from Seattle. Though the purpose of connecting with you is to give you a few treats to take home, but really I am most excited just to see YOU!!!

See you in a couple days!!!

Hey Tyler!
How awesome you not only went to one concert...but you're going to two! I am so excited for you...I'll be praying you get a chance to meet them and show them your skills...they'd be blown away!
I am in the process of writing you emails with pictures...it'll be a while though. But you're going to be gone all day anyways...=) Have an awesome time!
Hannah

Switchfoot just posted their setlist from Eugene on their website, so i thought you might enjoy checking out the songs they did!

stars
oh! gravity
meant to live
chem 6a
4:12
fatal wound
this is your life
shadow proves the sunshine
american dream
gone
faust, midas, and myself
on fire
awakening
amateur lovers
we are one tonight
let your love be strong
dare you to move

Shadow proves the sunshine was also AMAZING live. We're headed up to Seattle again today for another exciting performance!

wow! that's awesome tyler! I'm so glad you got to go and see them...they truly are amazing!

I love shadow proves the sunshine! it's my favorite!!!!

hey man....that's totally awesome! I guess you're having an awesome time over here in the USA!? huh? huh? yeah...dude.....I miss ya

That is so cool! I think that hearing about YOUR trip is just as good as if I went to the concert! I'm so exited to hear all aboutyour trip when you get home! Have fun in your last few days!!