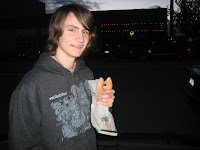 well i'm finally home! overall my trip was really great, and i won't ever forget all the things i had the opportunity to do and experience, but it's good to be back home. I think i got over jet-lag, so it should be smooth sailing again from now on. At least till school starts again tomorrow. That will be...interesting. 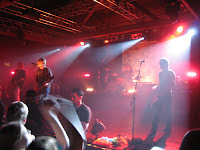 So, where did i leave you hanging? Ah yes...the trip to Seattle! Well, me and uncle Mike drove up there on Sunday, checked into our motel, watched a little tv, and got in line at around 5. There were probably 50 or so people in front of us, which we were a little surprised at...We should have gotten there even earlier! Oh well, at least we know now for next time! =) Luckily for us though, there was a Krispy Kreme two blocks away, so we darted back and forth from there keeping our legs alive and nourishing ourselves with donuts and coffee. At about 7:30 we were let in (I wanted to bring the video camera so you guys could see some video of the concert, but the security was unusually high and they wouldn't let it in) and we proceeded to the front of the room. I was on the right side of the stage, right in front of the huge speakers =) And also about 3 meters away from where Tim would eventually stand. It was pretty amazing. 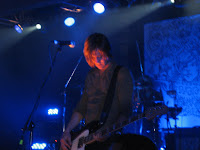 So, long story short...the concert was once again amazing although i must say that Eugene was a little better. But it was still really cool because i was a lot closer this time and also because of one special surprise...which i will tell you about it a minute! 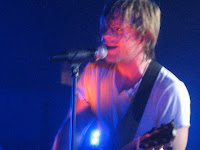 After the show i picked up the live CD, a Switchfoot shirt for Claire and four wristbands. Me and uncle Mike hopped in our car and drove around back to where their bus was, eagerly awaiting the band's appearance. I decided to head over to the crowd that had formed, not knowing if anyone was there yet, and sure enough, Jon was already out talking to people and signing stuff and taking pictures! So i trotted over there and waited for a few minutes...and then realized that i should probably at least get the camera from my uncle still in the car! But i was already pretty far into the crowd and didn't wanna have to shove in again. So i patiently waited with the CD cover to Oh! Gravity in my hand for him to sign. 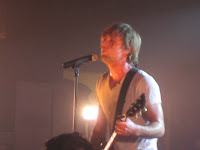 After about 20 minutes of patiently and gradually getting closer to Jon (I make it sound like he was a long ways away, but he wasn't that far, but he talked to everyone he met so it went slower than if he just said hi, signed something, got a picture and moved on), i finally wound up in front of him. He turned to me, and this is something how it went:

Me: Hey, my name is Tyler! Thanks for a great show, i came all the way from the Czech Republic just to see you guys! I was also in Eugene two days ago!
Jon: [stunned at first, then impressed] Wow! It's really an honor to meet you! How long have you lived there?
Me: About 12 years. My parents are missionaries there so...yeah. It's great.
Jon: Which show did you like better?
Me: Probably Eugene...
Jon: Yeah, me too. [smiles] [turns to crowd] Sorry guys! [laughter all around] But that's what's great about the shows is that each one is different and you never know what to expect!
Me: [smiling like a dork =)]
Jon: [turns back to me] we haven't gotten too far into Europe yet, the farthest we've gotten is Germany, but hopefully we'll get farther in the future!
Me: That would be great! [i couldn't think of anything to say...i couldn't believe i was actually having a conversation with Jonathan Foreman!]
Jon: Well it's really great to meet you! I wish you a safe trip back!
Me: Yeah, it's great to meet you too! Thanks again for a great show! 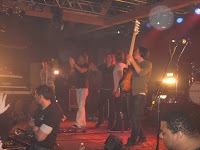 and i then walked back to the car, stunned! during the time we were talking he signed the CD case, so that was great! That was probably the best part of my whole trip (even though my Bapa insists that it must have been the Krispy Kremes =))!

The next day uncle Mike took me a to a huge rock museum thingy in Seattle with exhibits with great guitars, one was on Jimi Hendrix, there was also a place where you could play different instruments etc...a really cool place! 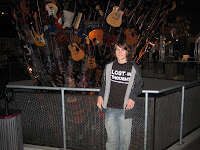 We then headed to the Market where they have fish, trinkets and anything you could ever want and need! Across the street was the very first Starbucks, so we got to go inside there and i got a Vanilla Frappuccino to warm me up...it was an incredibly cold day!

We then met up with my mom's arguably best friend Michelle Watson (who also happens to be a psychologist, and who periodically reads my blogs entries - hi Michelle!) at Red Robin and hung out and ate burgers and talked and then headed to her place where i picked up goodies to bring back home! 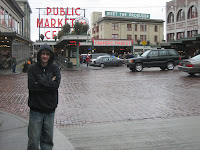 The next few days in Junction City, OR at my grandparents' house were spent gathering up all the stuff i had to bring back. So not much interesting went on.

We drove to Portland on Thursday morning and i flew home! I first stopped in San Francisco (which turned out to be a pretty boring airport), and then got on a plane and flew to Frankfurt. The plane was incredibly horrible...i don't know why, but it made me really sick on the way back. So when i stepped off the plane, i wasn't in the best mood. Plus i had missed my connection to Katowice where my mom would pick me up, which meant i'd have to spend 6 hours waiting for the next plane to leave. Luckily i started to feel better and i slept in the chairs for a little bit and it went alright. Then i flew to Katowice, mom and Claire and Lily picked me up, and we drove home! 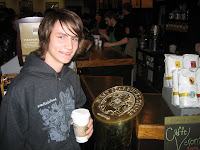 If i would have to give the trip a ranking from 1 to 10, 10 being the best, i would have to give it a 9, but only because of the lousy trip back and because i was stupid enough not to get a picture with Jon =) But everything else was more than anything i could ever have asked for! It was something that i won't forget!

Tomorrow we go back to school... I think i got over jet lag, but i'm not sure. We'll see in the morning!

The Switchfoot concerts really inspired me to be a better musician and even "performer" or how i present myself when i'm playing a song. It was really cool to see them in action, and i learned a lot from just watching them! Also, in the 3 days that i've been back, i'm learned 3 more Switchfoot songs - 4:12; Faust, Midas and Myself and the Shadow Proves the Sunshine! It was lots of fun! I'm thinking about putting something together for 4:12 with Caleb on the bass and Claire adding some percussion with a shaker, and i might get around to recording something, and if you're lucky, i'll find a way that you can listen to it! =)

Stay tuned for another update next week - the week without mom!!! Aaaah! It'll be a rough week. We'll eat nothing but bread and have to walk everywhere. It should be an interesting experience and i'm interested to see how dad will handle us naughty kids ;)

P.S. I got a haircut tonight...just in case any of you were getting concerned about my overly long hair in the pictures =)

P.P.S. And for those of you who are well educated in Switchfoot lore, might be interested to know that i have dubbed The Shadow Proves the Sunshine as the theme song of my trip. I got some video footage of stuff and if i have time to put something together that's what song'll be on there! So look out for something soon!
Posted by Tyler at 12:14 AM

Hey Tyler, a.k.a. The World Traveler!

I figure I'm one of the first to read your blog since it just came through minutes ago while I was sitting at the computer!

It's fun that you mentioned our time together while you were here. I LOVED spending time with you and your uncle. Like I said, it's rare for me to spend time with quality guys who are intelligent and deep, and you are just that! You go boy! Didn't we just have the best conversation?! I had a blast with you.

I'm glad you're home safe and it was so much fun for me to get to see you while you were here.

p.s. I guess you'll have to get that picture with Jon when he comes to Eastern Europe after you write him that follow up email to tell him how much you loved meeting him (he'll remember you once you remind him where you live...I can't imagine too many people come to his concerts in the States who actually live in the Czech Republic). Then you'll give him your dads contact information and we can begin praying that the ball will start rolling in the direction of where you live. They can come and stay at the hotel....and it will be so much fun for you! Can't you just picture it?!!

The best part about this blog (besides the fact that it was so fun to read!) is that you were downstairs last night writing it from home!!

I'm so glad you had an awesome time and have tons of great memories from your first trip to the US by yourself...great accomplishment, by the way, living through a hard trip back! You did well!

Sorry I have to leave you this week...hopefully you'll eat something besides bread!

Jon sounds like a cool guy
glad u had a good time in the US of Eh?
but u cut ur hair??? i thought u were growing it out? u crazy boy

The bootleg podcast of the shows are great, but it sounds like Switchfoot definitely had a fun time in Eugene. The sound is real tight but Jon is loose and having a great time. Cool that we could see what was the best show on the tour!