i've been meaning to get back to my wonderful blog for some time now (i have lots of things to write about!) but you know how it is... School is slowly coming to a close and studying and tests are a big time-taker. So. Now i'm back! Rejoice ye faithful readers! 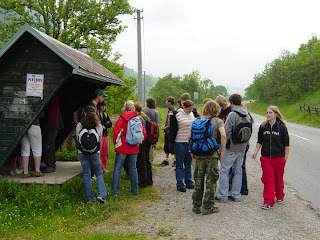 Exactly two weeks ago on May 31st we set off on a 7 hour trip to Slovakia with our school. There were 25 of us altogether and it was a great time! We went to a place about an hour and a half north of Poprad on the Polish border. The scenery was amazing, unlike anything i'm used to - it felt like something from the Lord of the Rings! 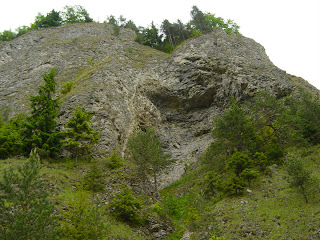 It rained a lot, but that didn't matter much. We stayed at a campground with cabins and spent lots of time in the restaurant playing card and board games. BANG! was the game of the week!

One day we went on a hike up to a place called "Tri Korony" or Three Crowns in English. I was listening to the Fellowship of the Ring audiobook on my iPod on the way up so that added to the coolness of the surroundings! Only half of us actually got all the way up to the top, the rest went down early and missed out on all the cool trees and rocks and random stuff like that! 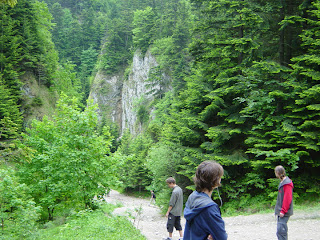 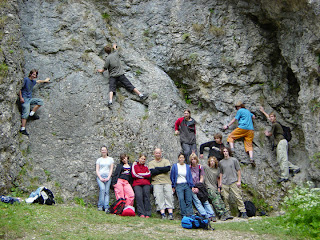 On the very last full day (Monday) we got into four rubber rafts and rafted down the river for about 15 km! It was lots of fun, and because I have some experience with rafts, I was named captain of ours, so i got to boss everyone around. It was great! =) I sat in the back of our six-person raft and steered most of the way, occasionally helping with catching up to everyone else. We reached this one spot which totally reminded me of the Fellowship's journey down the river Anduin - cliffs on both sides...it was really cool. 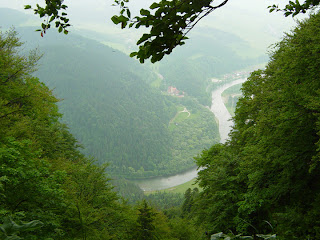 And then this Friday and Saturday something significant happened! Me and Caleb (but mostly me, Caleb abandoned me eventually) had our first real live performance! You see, every year, our youth group does a Streetball (basketball) tournament in town. This year we thought it would be fun to get a tent and make it into a little coffee-house, or "cajovna" in Czech. And of course they needed live music...who to call, who to call... Ah! Me! 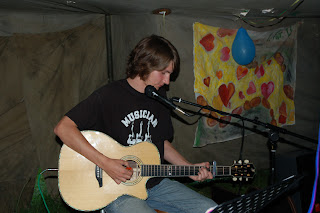 So i prepared about 30 songs and with breaks in between and doing songs over again, played for about two hours on Friday. Caleb played for a while, and then his bass started acting up, so he left me to fend for myself, which i was fine about. Here's a picture of both of us when he was still loyal to me! 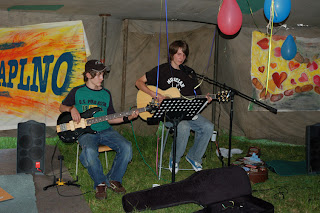 There weren't a whole lot of people who were in the tent, but on Saturday a LOT of people showed up for the Streetball tournament. So that was cool. I played on Saturday from about 6 to 9, and it really wore me out, but it was lots and lots of fun, i really enjoyed it! 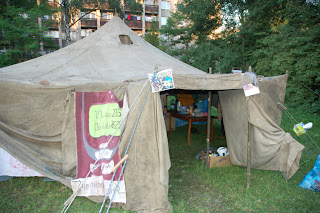 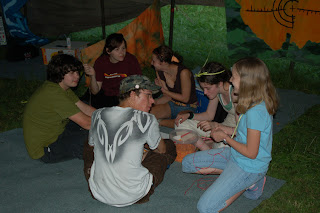 And so, we start to come to a close. Our grades are wrapped up next Wednesday, so after that, hardly any more classes and more freedom! Our English Camp starts July 4th, my Birthday is July 20th (for those of you who didn't know...hint hint!), then in the middle of August we're headed to the island of Corsica with our family and the Ellenwood and Hash family. JV Kids' camp starts on August 20th and before you know it...I'll be back in school! Aaah! It'll go by fast...Oh well, i guess i'll just have to enjoy the summer as much as I can while it lasts! Till next time!
Posted by Tyler at 12:41 PM

Loved it! Great update! It was fun to finally see pictures from your trip to Slovakia...who took them? It really did look different than around here...so strange that it's not that far away from here, yet so different. Good job climbing all the way to the top and being captain of the ship...just like Jack! Ha ha!

Wow Tyler....a picture really is worth a thousand words. Your mom said that you and Caleb were singing for some event, but until I just saw the pictures of what you did, I didn't get the full effect. How cool! No wonder you were tired! I can't believe that you could give out that much (musically and energy wise) for three hours in two days back to back. I guess you're prepping for your upcoming band days, eh?! (watch out Jon---from Switchfoot, in case you were wondering who I'm referring to!!).

The other thing I was just thinking about was that I'm sure a lot of people might think that missionary kids are deprived in some way. After all, they're away from their homeland...blah, blah, blah. But when I see your blog and hear about all that you're doing, it's really the other way around. You're the one whose life is rich and full and fun and wild and filled with adventure...and kids in America are the deprived ones in comparison!

Hey!
Sounds like you're having a great month! Way to go in the cajovna!!! =)
I can't wait for vacation...it'll be awesome...we call the airconditioned car again!!! hha..just kidding...well, not really=)
And then JVK camp...you know where it is now, right? woohoo!

Great blog entry! It was fun to read about your trip!
And to Hannah, I think it's out turn to get the air conditioned car this year!!

What a great looking class trip. I don't think I've ever been there. You've inspired me to visit someday. Great photos and stories.
Andrea Pitcher