These past few days have been very bittersweet for me. From Wednesday to Sunday I spent time with my closest friend, sir Hudson Jones. As I have mentioned in a few posts a little ways back, the Joneses are leaving JV, leaving Slovakia and leaving all of us behind. God has really blessed me, my family and many people with friends in the Jones family. But, now God has called them somewhere else, and there's no changing that. SO, since there's no point in getting angry about something you can't change, and I've accepted that God's plan is the best for all of us, even though we may not like it at the moment. And even though it's not fun, I am grateful that God is sending the Joneses to an accessible place - the States - instead of somewhere like Japan where none of us ever go! =) (I tend to look at the positive side of things, if you haven't noticed already!) 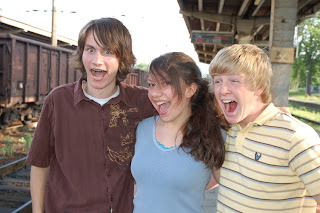 So, anyway, about these past few days! The reason Hudson got to come so early was because Miss Hannah Ellenwood was having a voice recital on Friday (practice on Wednesday) and had the great idea that me and Hudson could assist her and play with her! It was great and we all did a great job, especially Hannah! (Hudson messed up in the beginning...i'm gonna annoy him about that for a long time! =P Actually, you could hardly tell, it's all right, don't cry, Hudsy.) 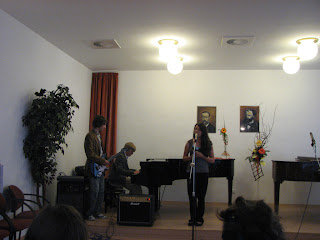 So we had practice on Wednesday, and had nothing to do on Thursday, so the wonderful Becca McMartin suggested we go shoe shopping at Tesco! So we did! And the amazing Andrea Pitcher sponsored us, so that added to the funness! Thanks Andrea! I got the blue ones, and Hudson got the white ones. We then wore them everywhere and felt so cool! =) 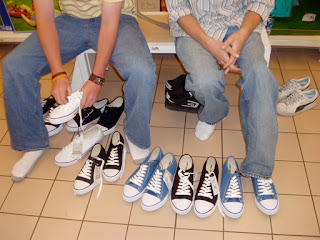 Once we got back from Tesco, we thought it would be fun to dress up (in the clothes we were planning on wearing to the recital on Friday), bring a couch outside and get Claire to take pictures! It was lots of fun and we got some great ones. Don't we look so handsome?!?! 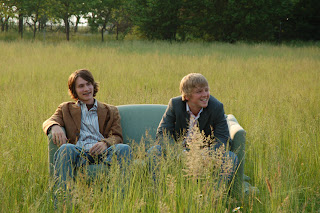 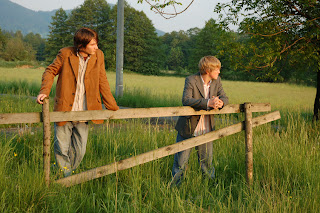 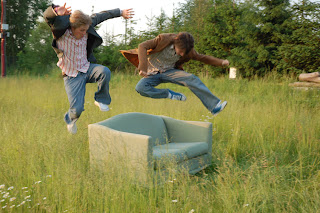 Then Friday came, the concert went well, and me, Hudson and Hannah joined up with Mike Sullivan who drove us to see...ba dum dum... Pirates of the Caribbean 3 - At World's End!!! That was really awesome. 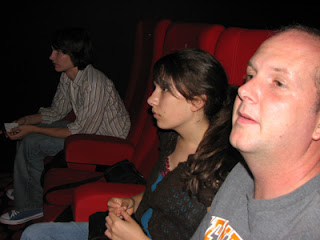 Come Saturday...me, Huds, Hannah and Caleb went down into town to our church and recorded some songs (about 8) and hung out together making music! We made a little EP under the name "The Aftermath", and it was really fun! It won't win any awards or score us a record deal...but it was fun! =) Every band's got to start somewhere! 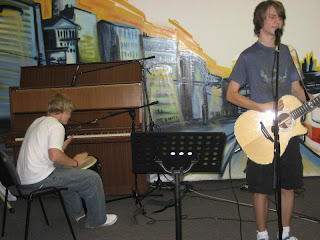 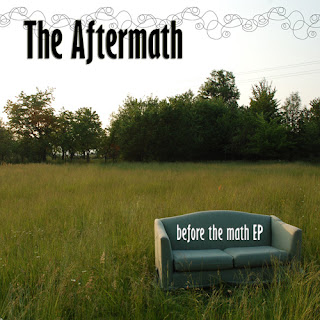 And then Sunday came... 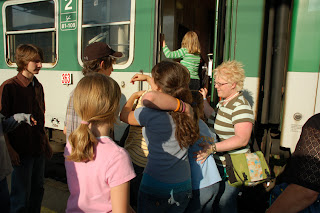 So, when I look back on these past few days, God has really blessed me with incredible experiences with incredible friends. Goodbyes are always hard, but luckily, it's not goodbye forever. The future is not clear, but it is bright, even though the present feels gloomy.

And on a side note, what's up ahead for me in the next two weeks - On Thursday I leave with my school on a trip to Slovakia for five days. We'll play some games outside in the wilderness, river raft, and hopefully have some good conversations. My youth group leader, Boža, is also coming, so that'll be great. My second year of high school is also slowly coming to a close, only a little over a month till the summer. That means tests and other unpleasant things of the sort. But it'll soon be over!

Back to what I was writing about earlier. As many of you know, I look like my dad. And though so far I don't share much of his passion for gardening or physics, I do respond in similar ways that he does to things. I don't cry often, not unless something manages to catch me off guard (like when my dad told us the Joneses were leaving JV), I'm more of a brooding type. I think, I write. Writing my blog helps me to cope with what's happening. So, for those of you who managed to read this far, I commend you! =) I do start to get carried away and write a lot when I have a lot going on in my head. It's who I am! 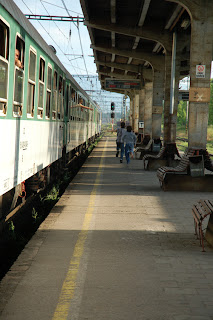 And it's not goodbye forever.
Posted by Tyler at 9:40 PM

Tyler...that was incredible. You have a gift for expressing yourself in writing. And I'm proud of you for how you're working through this. You're right...it's not good-bye forever.

Love you, and goodnight! Mom

Tyler! Thanks so much for writing! This is a good post! And now I'm mad at you forever for being dumb and telling everyone that I messed up!!!! Jerk!!!!!
I love you, Brother...
Hudsy

I loved reading about this past weekend. I thought about the Jones family (and especially Hudson) leaving many times throughout the past weekend as I knew you were saying goodbye. I prayed for you a bunch of times, asking God to let it be a sweet time of connection, etc. I think it's so cool when two guys can be best friends. So...now you have to say goodbye and like I said in my last posting, you can keep the emails and Skype calls going strong!

And by the way...yes, you and Hudson are handsome :o) I'd have a crush on you both if I was still in high school!!!.

I'm glad you process by writing....because then it's a treat for all of us.

I know this was a special and sad weekend. So glad you're the kind of guy who has such deep friendships. I am proud to be the official footwear sponsor of Aftermath. As a Patroness of the Arts I would like to purchase a CD - just so someday I can say that I have every album you ever recorded. So let me know how to buy one.
Great photos. Very artsy.
Andrea Pitcher

Tyler,
Thanks for letting us all glimpse your heart...you expressed it so well in your blog. And yes, I made it this far in the reading....a good read, too, I must say!

Thanks, too, for being such a good and faithful friend to Hannah....you are a good man, Tyler Patty!

Hey Tyler !! What a great pics !!
Thank u for your writing about Joneses... I know them and I will miss them very much. I like your posts. They are always so... I agree your mum, u have a gift and especially for this post u had it. Hope to meet u anytime.

Good for people to know.