Another hobby-like activity (which also happens to be Lord of the Rings) is a game called Lord of the Rings Online: Shadows of Angmar. I've played it ever since it was launched in May, and it's really fun! It's a Massively Multiplaying Online Role-Playing Game (or MMORPG) and that means that I'm playing with tons of other people from all over the world. Together we do different quests and save Middle-Earth from evil. I just reached level 33, and I'm very happy!

Yesterday I stumbled upon an Ent (I think)...here's a screenshot! 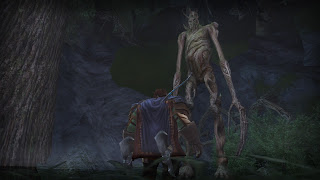 By the way, my guy's name is Thilios, and he's a dwarf hunter. He's very awesome. Right now he's being followed by some evil creature which I didn't want to fight! =) 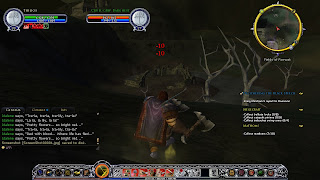