Some highlights from the past few weeks:

Nicholas and Zachary's birthday party in the beginning of October was a sure highlight. We spent most of the day playing the Lord of the Rings figures strategy game. One way to make the games extra interesting is by having a "scenario" or "scenery". About two months ago I decided I wanted to do something special for Nicholas and Zachary, and here is what I and Caleb came up with! We all had fun defeating each other in battles atop Amon Sul (or Weathertop)! And of course I really enjoyed making it! Just in case anyone was wondering, most of it is made with styrofoam and then coated with a sort of plaster substance to give it texture and firmness. Then a black base coat and many drybrushes later, voila! 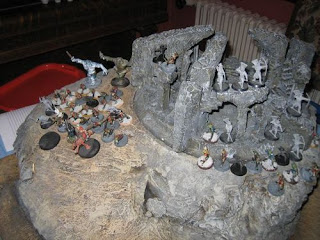 another highlight was a few weeks later when Nathan Pitcher invited us over for dinner! We enjoyed his cooking very much - some of the best chicken noodle soup ever and for sure the best chocolate chip cream cheese bars! We plan to return very soon. 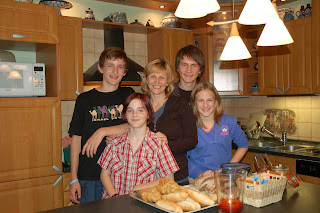 On Friday and Saturday 10 people from our youth group went to a thing called PDT (in czech Pracovni Den Tymu) which is basically two days of seminars and opportunities to build and connect with your team. It was a great time. Me, Caleb and our youth group leader, Boza, led worship and it was the most fun I've had in a while. Everyone there was so open to worshipping, it was a great experience.

For those of you who happen to read my blog and haven't heard of the band Angels and Airwaves - they're amazing. Just though i'd let you all know! They just released their second album (I-Empire), and I can't seem to get enough of it. A&A would probably be classified as alternative rock, but they're very artistic with their music, unlike a lot of bands these days who focus on volume. In the words of their first single of the new album - "Everything's magic."

While dad was in the States a couple weeks ago he got to go to a Passion concert, and even pray together with Matt Redman, Chris Tomlin and Louie Giglio! But anyway, he brought me back a book from there - Everybody Wants To Go To Heaven, But Nobody Wants To Die by David Crowder, and it's probably one of my favorite books of all time. It's very deep, and yet funny and spontaneous. Really well written.

On a different subject, I have a class in HTML at school this year, and so I've been testing my skills by designing blogs! Be sure to visit Nathan's blog at nathanpitcher.blogspot.com to see what I can do (and be entertained by the one and only NP)! Hopefully I'll get around to fixing my own blog up a bit someday...

Thanks for reading! Till next time!
Posted by Tyler at 10:43 PM

I love hearing how you have such diverse taste...from artistic endeavors to connections with friends and family to music ventures to reading books to designing web sites. Like I keep saying, you, Mr. Apple, have not fallen far from the tree!!! :o)

I'm excited to see you next month. Love ya, Michelle

This comment section is just begging for another one so here it is:

You are amazing at all the variety of things you do well!