As many of you know, I've always been by far the healthiest of us Patty kids over the years! I have had no surgery, and the first time I even broke a bone was last winter snowboarding!

Yet there is one thing that comes every spring like clockwork - strep.

But this year it didn't just come once and then leave...it came back for an encore! So even though I fought off a very high fever and sore throat a month ago, I woke up last tuesday with strep (or as we call it in Czech, angína).

While the first round went to sickness and I spent three weeks in bed, the sunny weather of the second round was enough to give me hope that I didn't have to be beat so easily this time! Obviously it's not good to play around with strep, and if not rested out properly could do bigger and longer-lasting damage, but this time I had hope!

A couple weeks before I got sick a second time Hannah Ellenwood asked me to play with her at her voice recital. She's been taking voice lessons for a couple years, and singing even longer! One thing I'm really going to miss is singing with her! 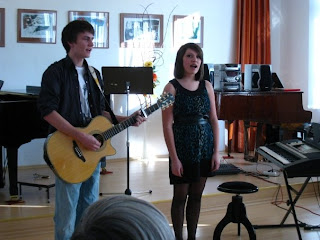 As it happened, her recital was on the Tuesday I woke up with an infected throat. So I went to the doctor, and then took a train to Český Těšín to play and sing in front of 50+ people! It was awesome! God really pulled through and I think we both did a great job. 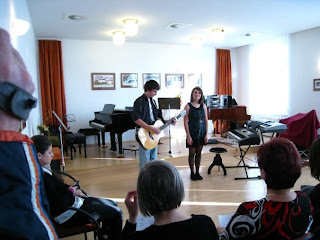 The two songs we sang were I'll Follow You Into the Dark by Death Cab for Cutie and Broken Strings by James Morisson and Nelly Furtado. We rocked! (well, Hannah rocked, I helped rock!)

And, so you can stop worrying, after the recital was over I took a train home and have rested ever since. A week and a half later, I'm happy to say I'm feelig much better! I'm super thankful God healed me before Easter so I can fully enjoy the days in remembrance to what He did for us all!

In ten minutes I'm actually going up to the Malenovice training facility to lead worship with Caleb for the Easter Friday service. Christians from all over the Czech Republic will be there, I'm really excited!

And it's gorgeous outside. Just the way I like it...not too hot, not too cold! God's creation is so inspiring!! This is what it looks like outside my window, right at this moment! 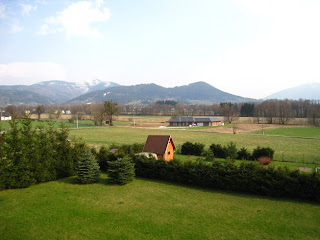 You totally rocked it, Tyler! Thanks again! I am going to be missing this too!