hey everyone! I have some funny stories to tell today...but it's getting late so i won't write too much if I can help it...

well, first of all I wanted to tell you about Wednesday which means the latest Exit episode! This theme was “image” and so our youth leader, Boza, decided that a fun thing to do would be to have a contest for the person with the most original clothes. But there was a catch – you had to come directly to the meeting with those clothes on, you couldn't change once you got there. So I decided it would be fun to dress up in my dad's big trench coat... But I had to come with it on, and I had Bible study with Mark before everyone else got there. So after we were done we decided to go to Albert and Mark had to get out some money, and i was hungry so I went inside to get a bottle of ice tea and a pastry. So after paying for everything, I started walking towards the door, only to find this tall man standing directly in front of my path, totally blocking my way out! He started to show me something, and my first reaction was that it was some advertisement for something. But what he showed me when he put his hand on my shoulder wasn't a flyer...it was an ID card. “Can you please come over here to the side and show me your pockets please?” So I, in my dad's oversized trench coat, wobbled over to the side, and after I showed him I had indeed not stolen anything, he let me go. I laughed so hard after that... Now I know that even our little Albert is safe from theft by secret security officers that are undercover! =) So there is my first funny story. And here is a picture of our group that was at Exit, I'm on the left so you can see how ridiculous I looked and why the guy probably picked me off as a thief! =) 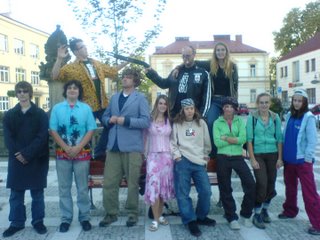 So after that day things started to get back to normal... And on friday was my big trip to Budapest, as I've told some of you! It started off great, we first had to take a train to Valasske Mezirici (or Valmez for short) about an hour away and buy our tickets because you can't buy international tickets in Frydlant. This is when things started to go wrong. I guess they had been fixing the tracks in one place, so you have to take a bus from Frydlant to this one place, then get on a train that takes you to Valmez. So, both of them following my lead, we got on the closest train to us that seemed promising. We sat down, and a few minutes later started to pull away. I looked out the window to my right and noticed a little sign on the side of the train that said “Valasske Mezirici”. So of course I totally slapped myself for making us all get on the wrong train... Eventually we got to a station and found out that the train we were on also went to Valmez, it just took a different route. Phew!

So we got to Valmez, bought the tickets (Patrick Till, Johnny Lobel – 24 year old american teacher at our school who has known Patrick's family for a long time, and I), and ran outside to get on the train. Johnny had printed out our itinerary so we knew exactly what time stuff left and got in etc. About a half hour into the trip, the ticket dude came. He had a big mustache. He stamped Johnny's ticket, then took Patrick's and stared at it for a little while... Apparently the ticket lady had written the wrong date on it and we weren't allowed to take the train from next tuesday. So that sucked. He let us continue, but without stamping mine and Patrick's, but said that he hopes that the next guys don't give us any problems.

Another half hour into the trip, Johnny and Patrick were asleep, and I was dozing off. Suddenly this guy appeared and said “pasova kontrola” - he was here to check our passports. I woke Patrick up and he choked. Apparently his dad had just taken his passport from him to get a new visa and hadn't gotten it back to him. So, luckily the police dude was nice and helped us figure out a route back home. By now we had ridden for about two and a half hours and were at a place called Horni Lidec out in the middle of nowhere. So, after talking to the guard he said that the best thing to do would get our tickets “interrupted” or canceled so we could at least get some of the money back. So in Horni Lidec we went to the ticket booth and she stamped two of them, and then noticed that we were on a completely different route than we were supposed to be on. We were following our itinerary, but back in Valmez the ticket lady had heard me wrong and written something else. Hmm.

So after a long ride back to Valmez we went to the ticket booth to see if we could get our money back for it or get it changed or anything. By now it was about 8. There the lady said that we would have to come back tomorrow and talk to the lady that sold us the tickets, she can't do anything about it. I still don't understand everything... So today we took the same train we had taken the previous day at 2:15 and got there at about 3 something. Then......we found out that the person who was there at the same time yesterday had the evening shift and wouldn't be here till six. Ugh. So we went to a pizzeria and then to a tea shop and killed time until six, and then headed back to the train station. After much discussion all that I understand is that as long as we go after the 17th – it will work for two months after then – it will be no problem. The canceling in Horni Lidec doesn't affect it because we were on the wrong route. Sooo... It seems that we are going to have to plan it for another time! And man am I tired............I get really tired and frustrated with myself when I have to convince the other person that they made a mistake...so those trips to the ticket booths were nightmares. It's not that I can't do stuff like that – I just don't enjoy it. But I guess it doesn't bug me as much now. It really drains me though!

And here's a fun fact mostly for Hudson - during these two trips that we took I listened to Imogen Heap like the whole time, so now whenever I hear her, I will forever remember...Friday the 13th!!! =) Did I mention that friday was the 13th? Well it was! Really! I'm not joking! Check your calendars! It's true! =)

Well, that's all for now! I'm really tired, as I've said many times, so I guess i will go to bed now! Oh yeah, and tomorrow at church I'm leading worship for the second time! So pray for me! Thanks!
Posted by Tyler at 11:07 PM

Tyler!!! Your trip was absolutely CRAZY! I have to give you a big round of applause, though, for how you navigated everything and stayed calm, cool, and collected the whole time even if you were frustrated. You go boy! At least you have a "forever story" to tell!

Dude, nice trip. I'm glad that I'm not the only one that always has problems with trains. At least you know a little bit how I feel all the time on trains....hmph. =) Imogen heap is the best....Yes...'tis true...I'm glad you're still listening to good music. Zero 7 iz feri gut tu...
gutbaj!
Hacn

Sounds like something that would happen to us, huh? I mean one problem after another...just random stuff! Yeah...that's definitely the style of the Journey! Good to hear some news from ya!