hey! another week has come and gone...and so a blog update must follow! First though, here are some pictures of our family that I promised you! 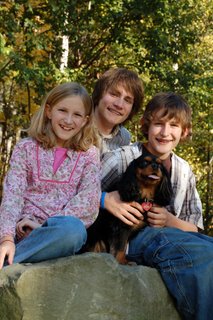 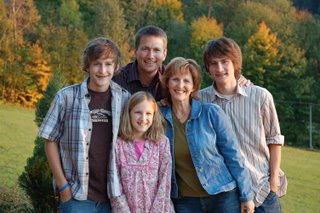 (By the way I was having a bad hair day that day so I want to reassure you that i am looking much better now! =) Plus the wind was blowing that day...so that didn't help much...)

nothing big happened until thursday...at 8 in the morning half the kids from our school (14 kids to be precise) met and we set off along with 3 teachers and the principal's 10 year-old daughter in two vans to Vienna! The drive was actually pretty nice, Jonny (the young teacher who was going with us to Budapest) drove one van, and so Patrick and I sat up front with him and chatted for most of the ride. Jonny had also burned six CDs with random songs on it, so that was fun to listen to on the way. Along with some Newsboys we also listened to some Irish music, Good Charlotte and anything you could imagine.

Once we arrived at our hostel, which was on the side of a hill with a view of Vienna, we unpacked and met outside. We got on a bus which took us to a metro station and headed into town! The first destination was the...drum roll please...papyrus museum. I have never seen so much old paper in my life. My life is complete! Okay, so seriously, I ran through, tried to decipher some German, headed back out and sat on the steps for about 15 minutes while the teachers (except for Jonny) enjoyed the excitement of decaying paper. =)

After the papyrus we moved on to a little more exciting attractions...but of similar nature. In Vienna there's this HUGE old library with shelves upon shelves of leather-bound books. It was really cool. Reminded me of the library in Beauty and the Beast. They also had statues and huge globes around the place, so that was sweet...

The town center was our next destination, where the huge church is. After a little while we walked towards the metro which happens to be right by...you guessed it...Starbucks!!! We were given the opportunity to take the metro along with the teachers to Schönbrunn, the big palace, but me along with a lot of other guys stayed in Starbucks...it was totally worth it! =) I sipped a Pumpkin Spice Latte and thought of all the people I wish were there with me...It was a lot of fun.

Once it got dark I voted for staying in Starbucks and just chillin' because I was so tired, but the guys convinced me to come to the Prater, the big amusement park in Vienna. I was dozing off in the metro...and barely staggered over to the Prater...but once I got on that roller coaster I was fully awake!!! =) That was a really fun night walking around and going to different Fun Houses and on all kinds of rides. I was so hyper when it was time to leave...but by the time we got back and after getting lost (of course) I was so tired... We were looking out at Vienna and all the cool lights and one girl was talking to me and I was soooo dead...she just kept on talking and I kept on nodding and thinking about going to bed...=)

So that night all the guys except for me were still hyper so they stayed up doing crazy stuff and talking...and I kinda half-dozed off to sleep. Eventually they went to bed and then I could relax. I actually had a good night's sleep. At 8:00 we had breakfast and then set off again. We drove the two vans into the city right by our next destination... The UN headquarters in Vienna! After going through security we followed our guide around and he explained stuff about the United Nations, how the systems work etc. It was pretty fun, until we got to a little theater and we watched this short movie about the UN...almost everyone in our group literally fell asleep during it! And it was only 10 minutes long! =)

After that we went to the market – food everywhere. That was a really cool place. Lots of restaurants, bakeries that make your mouth water, and seafood wherever you turn! Not my kind of food, but for some people it must be heaven! After figuring out that most of the menus were in German and essentially we would have no idea what we would be ordering, me and 3 other guys decided a safer route – Burger King! =) So after having a double cheeseburger with bacon, we went back to Starbucks to hang out. I knew that I would be mad at myself later if I didn't have a frappe. So that's what I did! Before we had to leave and meet up again I bought a very special CD... “Music from the Starbucks Coffehouse!” Lots of jazz, really fun to listen to.

So we met up again and drove back...as usual I was tired and everyone else was wide awake...so I sorta dozed off every once in a while and eventually the others joined me in silence, listening to the rest of Jonny's music mixes.

So overall it was a pretty good trip, don't you think? =) On Saturday I was so tired from walking around for two days that I just stayed home...didn't do hardly anything. But it was fun! On Sunday the time changed...so of course I was up earlier than I had to be. At 2:30 we had worship practice and at 4:00 we had church!

Today, or Monday, was also pretty good. After finishing school at 12:15 I went home, did some work, and at 2 I went up for the hotel for a seminar that's going on now! Today the theme was evolution vs. creationism. It was one of the most interesting things I've ever heard (besides my dad's talks, of course!). At 3:30 I went to my art class and finished one project. At 6:00 we had dinner at the hotel (dumplings with strawberry filling) and later on we watched “The Da Vinci Code.” The reason is because tomorrow the next seminar is on that. The movie was very strange... I hadn't seen it...and if I wasn't going to hear the seminar tomorrow then I probably wouldn't have ever seen it. But I'm really excited for the seminar tomorrow.

Well that's all for now! I will update you as soon as I have more info! If I get the chance I will also put up some pictures from Vienna once I get them from different people! Don't forget to leave a comment and let me know how you are doing!
Posted by Tyler at 10:33 PM

Tyler.....I LOVE reading your blog. You are such a great writer and you take me along with you. I am so happy for the rich and full life you are living!! From trips to Austria to eating fun food to hearing great, in-depth talks to leading worship.....my word, you are one of the most well-rounded teenagers I know!

And incidentally, no need to apologize for the hair...I thought you looked great!

nazdar!
hey, well I am going to write you back to your long email real soon1 sorry it's taking so long! Sounds like you had fun! wish i coulda been there!

tyler....do you know what site jonny is putting thpse pictures on?/?

Dude you look like Harry Potter....get some glasses and it'll be even better. I'm going to die my hair red so I'll look Ron...yeah, then we can go to a magician's school and learn some freakin' tricks on the piano and guitar