Hey everybody! another week has gone by, and here i am again to tell you what happened on my end of the line! I have pictures again, so you should be happy! =)

the first few days of this last week I was actually home sick... I went to school on monday but started to feel nauseous so I came home and was home till wednesday, and went back to school on thursday. It was a good rest time, and even though I still have a little cold left over, i'm doing a lot better!

On wednesday Caleb went for a usual ortho check-up......or so I thought. I was on the couch in our living room reading and I heard the door open and then close; I knew that mom and Caleb were back. As I saw Caleb walk past and up the stairs, I caught a glimpse of his "i know something you don't" face when he looked at me... Thinking it was nothing, I continued reading. Soon Caleb came back down, walked over to me, and smiled. I automatically smiled back...and then laughed! Guess what?! Caleb just got braces! I was totally shocked, especially cuz he didn't tell me that he was going to get them even though he knew! That little punk...=) 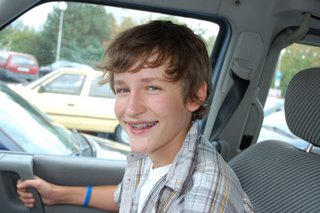 As many of you know.......Lost is back for the third season! Woohoo!!! I downloaded the first episode and watched it as soon as I could... I'm so glad that J.J. Abrams is back for this season. Hopefully he can organise the show more, i'm really excited for this next run of episodes.

Speaking of episodes and TV... My mom, Caleb, Claire and I will officially have our 5 seconds of fame on national television for the EXIT 316 episode "Prayer" that will be airing hopefully sometime next spring. Literally 5 seconds! =) Of course I was the best of us all...no doubt about it. What we did was play that we had just checked into a hotel room and were unpacking. That's basically it. Hehe... Of course my unpacking skills were far superior to any of my fellow family members'...=) After we ended us kids also got a picture with the "angels" of the show - Ales Juchelka and Johanka Vesela! Johanka is only a year older than me and is in the same grade as I am! Weird huh?! How would that be to be a star on TV at that age! Wow! 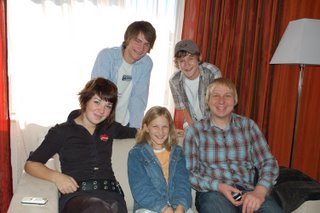 Claire's birthday is tomorrow - on the 8th, so I think we're doing something for that! Don't know what yet though! She had a Frydlant american friend party on friday through saturday morning with Becca, Grace and Lucy Till. They carved pumpkins, had pumpkin pie and stayed up till one watching a pumpki...sorry, movie! =) She had lots of fun!

Then today, after the filming for our debut on TV, we went over to the Pitcher's house for Nicholas and Zachary's party! That was a really fun time - we played a Lord of the Rings figure strategy game that is one of the coolest things around. You buy these plastic or metal models, and then you can paint them all by yourself, however you want to, possibly morphing the model a little with extra pieces or clay, and each figure has its own stats that you can then build an army up out of and immerge yourself into a full on battle! It's a really complicated, but incredibly fun game. The first time I played a fortress scenario with Becca and Mel Ellenwood against Nicholas, and got totally creamed... But then I played with Zachary against Nicholas and Mr. Till on a different map and we won! So that was good! =) We ended the night off with...you guessed it...a night game. Just a little "base tag." Overall it was a pretty good day!

And this is for Hudson...a while back you asked for a goofy picture of me... Leaving the hotel where we filmed my mom was taking pictures and the wind was really blowing so I thought to myself... "Weird hair should come with a weird face!" So here you have it. A rare picture of me goofing off. Enjoy! =) 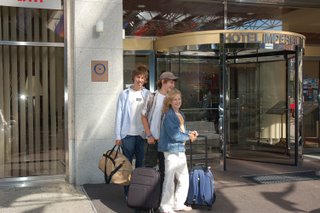 I'll put more pictures up from the Pitcher boys' party as soon as I get them from Becca!
Posted by Tyler at 10:32 PM

Sounds cool tyler! Sorry I haven't written you bck yet, i've been real busy! I will though soon! Toodles!

It's such a trip to see the picture of you with the "angels" from Exit. I've watched three of the episodes, and then you to see you, Caleb, and Claire with them is a bit surreal. It's like taking one reality and transposing it over another. I can hardly wait to see the episode with your family in it! I'll have to get your autograph next time I see you!!!!!

that's really cool....don't worry it is known world wide that you have unpacking skills. lol.
haha I laughed whilerading this blog... i had such a dull day it was great to read about what's going on there.
Well see ya
suska

Hey Tyler! Well, your blog was pretty fun to read! Noah came home from the party yesterday and was like really excited to tell us about Caleb....I guess I'll see him today though...we are coming over for Claire's party I think! And while I am over there we can take some REALLY, REALLY wierd pictures of you...okay? So start thinking...I can be your official photagrapher! YEAH!!!!!
See you later!
Hannah

hey guys! just wanted to say thanks for all the comments! It was really nice waking up to all of them! I was like "wow!!!" Danke!