Hey! I'm back! Well, i guess i should start off and tell you a little about what's been going on!
On wednesday we had the fourth exit group!!! It was really good! The episode was Conflict, and it's my favorite so far. We had a great discussion in our guys' group this time, and now we're getting really tight so no one's afraid to say what they think. Oh, and about double the people that came last time were here on wednesday! So that was great. 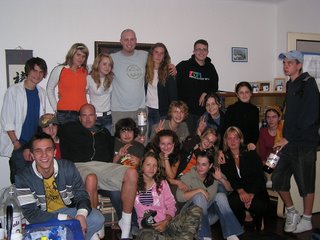 Right before Exit on wednesday Matej (for you who don't know, he's the other guy in our youth group “team”) went to a tea place with a guy who is in our discussion group – Robin – and talked to him for about an hour and a half, mostly about God! Basically to sum it up Robin (who was also at English Camp this year, and also goes to school with me, though a year below me) said that he believes in Jesus! After a long discussion with Matej, Matej asked him a question: “If you were to die right now, where would you go? Heaven or hell?” Robin's hand went to his chin and his whole body started to shake. I'm not sure if he answered, but obviously God is doing something in this, so please pray for him!!

One thing that we as a youth group “team” do is every two weeks on friday we have spiritual growth meetings, where we have some teaching and then talk about plans for the future and make decisions. This weekend was a special growth meeting...all that we were told was to bring 200 krowns, that we were going to stay overnight somewhere, and to bring “spolecenske obleceni” (which in english is “formal clothes”). So of course I was a little confused.....=) (note the example of guys being confused below...click for full detail...hehe) 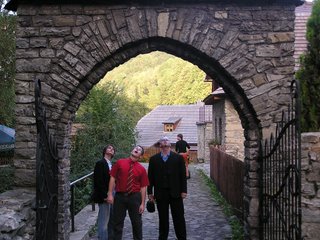 So we met on friday in front of my school at 4 pm, got it cars, and set off for an unknown destination! To cut it short, we were at a place called Stramberk, an old town about an hour away from us in the hills with an old tower etc. We stayed at this nice hotel, and on friday evening we got nicely dressed and went to a “vinny sklipek” - wine cellar – where we had great food and the others had wine! =P Unfortunately i'm not 18 yet...sometimes it's not so good being the youngest in youth group...But oh well! The food was really great and it was great just being together as a team. Before we went to the cellar we surprised the girls with flowers and got some pictures of us all! Don't I look smashing? =) 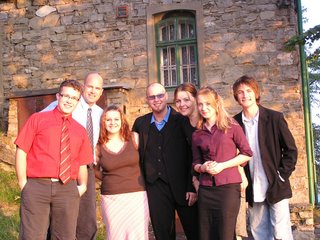 Then the next day, after a long night of listening to Boza, our youth leader, snore, we had breakfast, I led a little worship and had a little teaching. Then we walked up to the tower and planned and talked about what's in store for the future. I'm more of a listener than a talker, so most of the time I just sat and listened and watched, and it was fun! Then at 1 pm we got back in our cars, and returned from a great experience and probably the best time i've had with everyone! 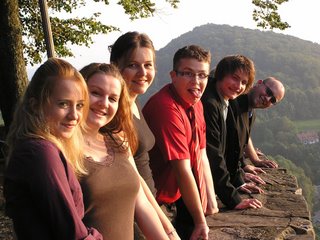 So that's all for now! Thanks for reading, and...oh yeah! This is mostly for Huds, Corrie and Hannah...and any other Lost fans out there...: I'm catching up again!! After a long pause, i got the second season from Mark and am already on “One of Them”, it's like episode 10 or 11 or something like that...It's awesome!! =)

That's all for now folks! And if you ever see John Mayer's “Continuum” in a music store somewhere, don't hesitate and buy it right away!!! =) Talk to you later!
Posted by Tyler at 7:47 PM

Dude you're really crazy about that Continuum album....is it really that good? I haven't bought it yet...I'm thorry....sniff...
Nice pics.
Hudson

Hey Tyler,
Those pictures are great! You dressed up pretty nice too....

Yes you did look smashing! Hey, you could wear that when you're on Superstar next year! Hee hee!

I love hearing about all that you have going on. It's so cool that you love sharing Christ and leading worship and being a good friend. Then to think that you like listening sets you apart as a guy. I just heard today that guys aren't very good listeners, so the fact that you can listen is a great thing! You go boy!!!!!!

By the way, I'm not too fancy in that I dont' have a picture to attach....so you'll have to picture what my face looks like!

:) i think i'm in the journey loop now. becca's down here in slo and she was telling me about all the blogs. so I'm spying on all of you.

i'm going to check out the album right now. i must say, I'm pretty impressed with you guyses taste in music.