Well, today was pretty eventful! After a boring morning of mostly biology, at 12 I walked home, unfortunately with a dead iPod battery. So the whole time I was thinking...I can't remember what about though. Hmmm...

Anyway, then I decided to visit my good friend Becca and fill my iPod with music and audiobooks...and also get a silver Sharpie. So I walked over to the Pitcher's house, where she lives, and talked...and talked...and got my Sharpie...then talked...then had a quesadilla...then put music on my iPod! Then we talked...and then I had to go because I had to go to a youth group meeting!

So I ran back home, all the while listening to Move Along by All American Rejects, every once in a while stopping to play on my imaginary drums and rock out on my imaginary guitar, not forgetting to mouth the words I knew, which was about...two or three words. 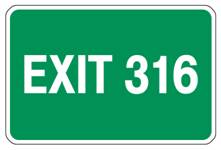 So once I got home I cleaned off an apple I had picked on the way home, and got mom to drive me down to town and so I met up with Boza, our youth pastor. Then we got together with the rest of our team and talked about what was going to go on today and how today is going to look like. Because, today was a very special day.........after years of planning and lots of problems, something big finnaly happened today...something that's happened for a reason and something that made history. The first episode of EXIT 316 aired today, on national television.

The theme for the first episode was "jina dimenze" - different dimension/reality. It basically was about the spiritual world and how there is something other than what we see. It was 17 minutes long, including a Switchfoot music video of Meant To Live. Overall it was really amazing even though it was the second time I was seeing it. And the next episodes will just get better.

After watching, us 15 (7 of us were team, the others friends or invited people) divided into two groups, one guys, one girls, and discussed with help from a little work book that my dad helped write called "Jizda 316" which is "The 316 Drive". Our group went really well seeing as it was the first episode, and also the most spiritual one of all of the other upcoming episodes. I'm really excited for next week! So pray for people all over Czech that they would tune in and want to know more! It's one of those shows you can't really describe...it sounds strange when you try, but watching it is truly a unique experience. A lot of work went into making it all, and it shows.

Well, it's getting late, and I have school again tomorrow...so enjoy your day and leave a comment if you get the chance to!
Posted by Tyler at 11:03 PM

Haha, that's pretty sweet. I like the look of your blog. Chuck Norris is my hero...Keep up the good work.

tyler! love the blog! I cant believe you let someone else think of the name for it!
So Chuck Noris, huh? Pretty funny! *chuckles* *gigles* *laughs*

btw where did u get those?