Wednesday morning, Mark Krupa, Jacob Barr and I set off at 7 in the morning to Bratislava. Mark had to renew his visa there, and the embassy was only open from 9 to 11. We thought we'd get there no problem...we were wrong. We got stuck in a traffic jam before Bratislava and didn't get to the embassy until 11:40. Oh well! So we decided to continue the rest of our plan anyway, and come back the next morning and get the visa.

Jacob, being the funny person he is, decided to pretend he was chinese and ask for directions to the bus station in...you guessed it...chinese. Mark agreed to be his translator. So Jacob stopped this middle-aged woman, started quoting the chinese rap songs he knew, and Mark translated! I stood off to the side laughing my head off. I cannot keep a straight face when those two come up with something like that. =) Luckily she spoke great English and was headed to the bus station herself, so she took us there, asking Mark questions along the way. Eventually, she figured out that they were joking around with her, and thought it was quite amusing! She turned to Jacob and with a smile on her face said: "You're full of crap, you know that?" Jacob replied with a great big smile: "I'm so full of it my eyes are brown!" =) It was really funny. 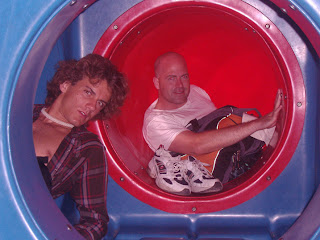 So we got our bus tickets, walked around Bratislava a little bit, and then got on our bus to...yes, Vienna!!!

After an hour we arrived, and did many things that day. We went to Starbucks (YESSSSS), Burger King...you know, the important places in Vienna! =) We also went to the Hapsburg summer palace Schonbrunn, and walked in the AMAZING gardens all around there. It was the hottest day in Vienna in a hundred years according to some people, so Jacob and Mark decided to cool off in the river! I watched our belongings and listened to the audiobook of the Two Towers!

From 10 to 12 we hung out in Starbucks, and then decided to head back to the river. Wandering around a little bit, we found a pretty nice kid play area/water park, and decided to set up camp there! We weren't going to pay 15 Euro for 4 hours of sleep! Except, we didn't have anything with us, except for maybe an extra shirt! There was this mound in the center of the area with a windmill on the top, so i lied down while the other two went hedgehog hunting (not hunting, don't worry, just capturing!). And guess what?! The sprinklers turned on! So our stuff got soaked even though I got out of there with everything pretty quickly. We tried sleeping on benches, but the bugs were biting too much so we needed to find another temporary home. This was around 2:30 in the morning, and we had been walking all day, so we were pretty tired! 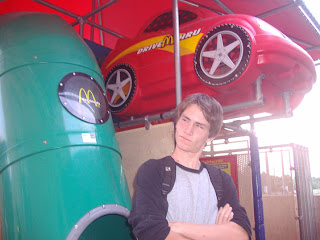 After about 30 minutes of walking, I noticed an interesting place...McDonald's! It was closed of course, but one thing wasn't....... The outside play area! =) So we took up residency and slept for about 4 blissful hours!!! It was one of my best ideas ever.

In the morning we missed our 6:30 bus so we had to wait for the next one at 8, got to Bratislava, got the visa, and drove back home! It was quite the experience!
Posted by Tyler at 4:06 PM

Where on earth is Bratislava? That's a country I've never heard of! How long did it take to get there? And who is Jacob? What a great adventure you had. It sounds like you and Ronald M. bonded!

Thanks for writing! Even though I am with you a lot, I hadn't really heard the story, so now I got to! Thanks!

Tyler,
This story brought back good (and bad :) ) memories. You wrote so well you made me laugh outloud.
-Mark