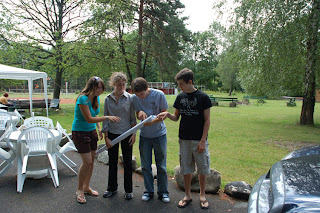 well, the reason that i've taken so long to write about English Camp is...I'm lazy. Well, not entirely, it's also because it's so hard to write about such a surreal experience!! But i will attempt to capture as much of it as I can for your pleasure - or at least pull out the interesting parts!

I could write for hours and hours about what we did and how things went...but i won't, because who would want to do that??? Both write it and read it I mean. So. The basic outline of things was...

And now for some stories!!! 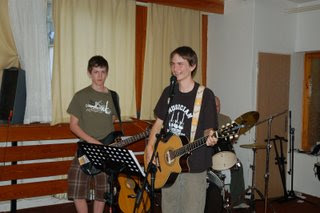 One thing we (team - CZ and USA) decided to do one day was a 24 hour continuous prayer time. To tell you the truth I was pretty skeptical about it...and I didn't want to sign up for an hour of prayer in the prayer room. It seemed like it would just drag on...that there's only so much you can pray about! But i felt that God really wanted me to join in on that...so i checked the sign-up sheet...and it was full. All the 24 hours of the day had been taken by someone. So, i glanced over the sheet...and Patrick's name caught my eye. Patrick, Patrick, Patrick... We've been going to school together for the past two years, and he's been a great friend to me especially lately. So I asked him if I could join him from 3-4 in the morning, and he said sure!

So we got up at about 2:30, made some coffee, and headed to the prayer room. And then it just started to roll! We took turns praying...and it's hard to explain but I knew that God was guiding our prayers and really keeping us focused on our task. I decided not to look at the time on my phone so I wouldn't be thinking: "Aaah...still a half hour to go...." or something of the sort. So I held out...but after quite a while I gave in, and glanced at my phone. I only looked at the minutes - 40. So 20 minutes to go. Before I knew it, someone came into the room to take her shift. So we packed it up, headed back to our rooms, and on the way looked closer at the time. It was already 5 in the morning! The person from 4-5 hadn't woken up, and we had prayed for 2 hours continuously. That was a shocker, but I really felt blessed by it; it was really strange, but great! I will for sure never forget that experience. 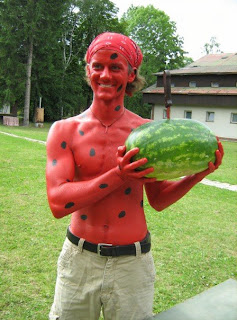 Our big hike day came, and we decided to hike (or walk) over to the dam called Sance. It took about 2 hours to get there, and it was great talking to people along the way. Once we had reached our destination we pulled out our food and talked some more. I could feel the wind starting to pick up, and so I took Lily (who had joined us at the request of Caleb) to a better place to hide her from the wind. Then the rain started to come...so our whole group went to wait until it subsided. It didn't.

I have never seen so much rain EVER here. Croatia two years ago rivals it, but it's definitely the winner here in my book. Maybe it just seemed like more since we were OUTSIDE and hiking back to the hotel. To make a long story short, I will skip a bit. We arrived at the hotel an hour and a half later soaked to the bone. If someone didn't see the rain, they would have thought we all jumped into the river together! It was really funny. =) But we got all dried up and ready for dinner and luckily no one drowned during our little adventure! 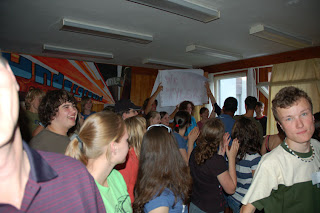 Overall it was an amazing camp. The Czech team did an awesome job leading the camp and creating relationships with the students. Evening program was great, Mark did a good job with the talks, and i learned a lot from leading music! Right now it looks like next year we'll be gone during English Camp in the States, which is kind of sad... But it'll just make me even more excited to serve in two years again!
Posted by Tyler at 3:45 PM

AHHHHH! All is right with the world! You made up for your silent blog by writing lots of great things...thank you!! I enjoyed reading every bit of it!

Like mom, thanks for taking the time to post all of this! That must have taken a while! I love the picture of Jacob painted as a watermelon, that's totally the kind of thing he would do!